Covid-19 is the infectious disease caused by the most recently discovered coronavirus (“CO” stands for corona; “VI” for virus, “19” the year in which it appeared). This new virus and disease were unknown before the outbreak began in Wuhan, China, in December 2019.

The group of coronaviruses (which are RNA viruses) has the ability to cause respiratory infections in certain mammals including man, and the digestive system of animals such as birds, with symptoms ranging from mild influenza; like that of rhinoviruses, to lethal; like that of SARS, MERS and Covid-19.

What are the main Symptoms of covid-19?

The most common symptoms of COVID-19 are fever, tiredness, and dry cough. In more severe cases, infection can cause pneumonia, severe acute respiratory syndrome and even death.

Who is at risk of developing severe illness?

COVID-19 is a new virus that has affected the whole world badly due to the fast spread between people by the close contact within 5-6 feet. During the outbreak, most of the countries have taken strong measures among their people to prevent its spread, where it highly affected the economy of the countries due to lock down of their factories and institutions. Also has lead to loss of income of living for the people who suffered a lot from that. Covid-19 mainly affects elderly people, especially those suffering from certain medical problems such as hypertension, heart disease, cancer, respiratory malfunction and diabetes. In such persons, disease may develop to a very serious level or even may lead to death.

Morphology and the General Structure of coronavirus:

Coronaviruses are considered as large viruses with almost spherical shape with typical projections on the surface. The size of the virus particle is different ranging from 50 up to 200 nm. in diameter. The total molecular weight of the whole particle may reach 40.000 K Daltons. The core of the virus, which is the nucleocapsid, is protected by an internal protein membrane and an outer double layer of lipid. 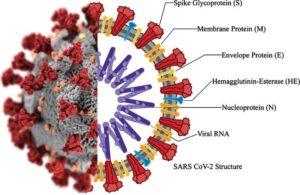 Transmission of the virus SARS-CoV-2:

This is the causative agent of covid-19, and since the virus infects the respiratory system, infected carriers can spread viruses into the atmosphere by breathing, talking, sneezing and coughing. Coronaviruses infect mainly the epithelial lining of the respiratory system of human and that of the digestive system in animals. Therefore in human, viruses are transmitted from the carrier to another host by an aerosol droplets, vomit, or by fecal-oral way in case of animals.

Coronaviruses show different risk factors; some has the ability to kill more than 30% of those infected individuals, such as in case of MERS-CoV. Other type cause no harm such as in case of common cold with general symptoms of fever, sore throat to a swollen adenoids.

Coronaviruses can cause pneumonia and also bronchitis either direct through viral infection or secondary through bacterial infection. The human coronavirus SARS-CoV, has a typical type of pathogenesis because it has the ability to causes both upper and lower respiratory tract infections.

Three are 3 types of human coronaviruses that can produce powerful and severe symptoms:

This is the causative agent of: Severe acute respiratory syndrome (SARS)

This is the causative agent of : Middle East respiratory syndrome-related coronavirus (MERS)

Viruses are obligatory intracellular parasite, i.e. it depends on the living cell for its survival and replication. After its attachment on the cell surface by a special receptor, it allows its RNA to pass through the cellular membrane to the cell cytoplasm. Then the host cell will diagnose and mark that genetic code and use the cellular components and machinery for the synthesis and replication of the viral parts making hundreds of complete viruses. Then, these viruses are released through cell membrane by a process resemble budding surrounded by a double membrane taken from the host cell membrane during release and looking for another healthy host cells to be infected and the cycle is repeated.

Due to unknown reasons, a frequent and spontaneous change occurs in a piece of the genetic code during its translation to proteins, this is called mutation. The human cells are considered as DNA-dependent, where the DNA is more safe and integral than RNA. This is because DNA permanently checking itself for any change or mistake might happen which then repair it immediately by the use of the DNA-repair system and bring it back to normal form, while RNA is a lot messier and less organized. When a mutation occurs on the surface of the virus, mostly the antibodies formed in the body against the previous infected virus or due to vaccination may have no longer effect or very little effect (with different percentages, depending on the type and size of the mutation).

Several types of mutations in covid-19 have studied and recorded:

In general, all vaccines used are to make our body (the immune system) trained and ready for any possible attack might happen in the future by that disease whether virus or bacteria. Two types of covid-19 vaccines were developed; the viral component vaccine, and the whole viral particle vaccine.

Number and types of Vaccines produced:

Since the beginning of the outbreak of the disease, intensive efforts were made for the development of an effective vaccine to stop spreading and controlling the disease.

The following are the types of vaccines that have been authorized:

National regulatory authorities have given an urgent authority for about 30 vaccines against covid-19:

Nine vaccines have been approved for emergency or full use by at least one stringent regulatory authority recognized by the World Health Organization (WHO):

The World Health Organization has given an emergency improvement for the use of 9 vaccines:

Five others are still under study by the WHO:

Although high percentage of people around the world have get at least one type of vaccine and get one or two or even three doses, the disease is still could not be terminated for several reasons;

Among the LFU students, by applying a simple survey on 59 students responded to the study, it appeared that 23 of them (39%) did not take any type of vaccine, 32 has taken 2 doses of vaccine, and 4 taken only one dose.

Below is the number of total infection and total number of deaths around the world including Iraq, until 1st April 2022:

Here is part of a statistical list of infections around the world including Iraq published by the World Health Organization until 1st of April -2022: